I can't believe TJ is already a month old.  Man, the time flies!  TJ's personality is starting to develop.  He's even smiling when we kiss his chubby cheeks.  Did I mention he's chubbing up a bit?  It's adorable.  He is also starting to "talk" too.  Mostly when he's completely bored, which happens a lot.  I mean, what do you do with a 4-5 week old that cannot hold his head up, see super duper far, and cannot hold toys?  Apparently shop.  The boy loves being in his stroller looking at everything, which means he is momma's instant shopping partner.  He is also not really sleeping a lot during the day either.  I thought all newborns slept a lot?  I guess it is a myth.  And since he's always awake during the day, he is also really bored.  A lot.  I have been pretty creative with keeping him busy and not bored.  So far it has been working ok.  Well, except for the idea of giving him baths to cure boredom.  That is a VERY bad idea.  I really do think he thinks I am trying to kill/drown him and then eat him.  I kind of smell him after we're done cause he smells so nice.  His hair too is so fuzzy.  So fuzzy.  He's starting to get that 80 year old balding man look.  (see pictures below)

All in all we are doing pretty well.  He's sleeping a good 4-6 hours at night.  That doesn't mean we are still sleeping a lot.  He must have a lot of tummy issues cause he grunts all of the time.  I've read a lot about it online and it's common...we just have to ride it out.  How much is a night nurse? =)
TJ is very different than Libby was as a baby.  One way they are the same is with having marathon feedings.  This baby can eat more food than I thought was humanly possible.  I realize he is growing and growing fast but good grief.  Sometimes he will eat every hour on the hour and scream bloody murder if you try to stretch him to even two hours between feedings.  Usually he goes 2.5-3 hours and has 4.5 oz to eat but lately he is wanting at least 6.5 in the morning every 3-4 hours and then has 4.5-5 every 2-3.  It's insane!

Well, here is a brief summary of everything that is all about TJ:


So now for the regular installment of the milestones from What To Expect The First Year: 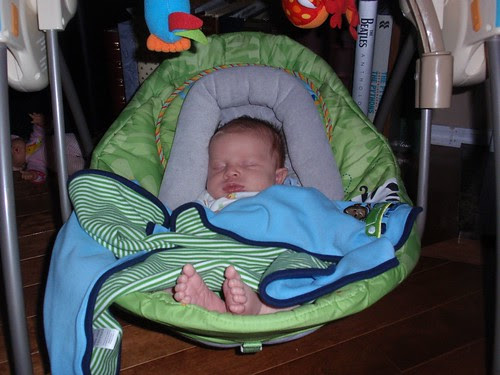 (look at those adorable feet!!) 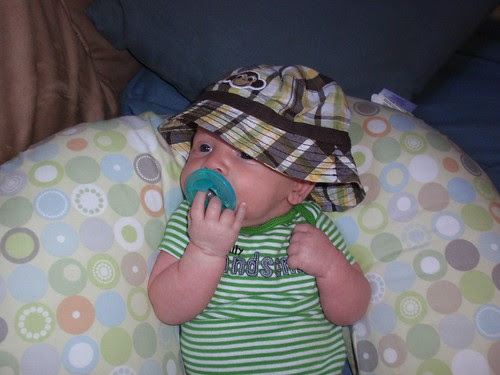 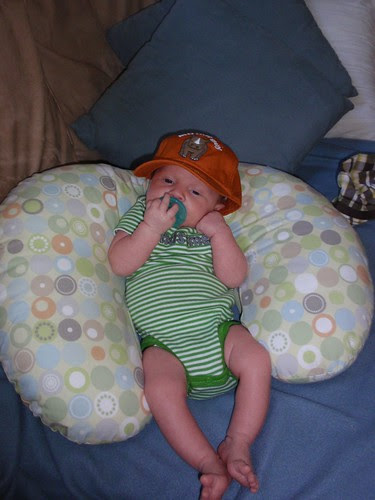 Posted by mommyski at 1:07 PM No comments:

We tried to send this out to as many people as we could, but here is the official birth announcement for Mr. TJ.