12.26.08 Mirly Christmas (2)
Originally uploaded by Holly Mroczkowski.
Hopefully no one will care that i'm posting this here but I thought it was such a great pic of the Mirly half of my family. Merry Christmas everyone!
Posted by Holly at 8:02 PM No comments: 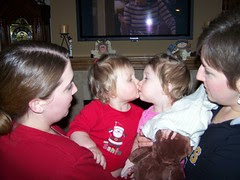 12.26.08 Libby and Zoe Kissing
Originally uploaded by Holly Mroczkowski.
Cutest cousins ever! Libby and Zoe kissing each other good-bye. My Dad took this adorable picture. =)
Posted by Holly at 10:11 PM No comments:

My wonderful hubby got me the cookbook 'Deceptively Delicious' by Jerry Seinfeld's wife for Christmas*. I had been talking about it for months and how I wanted to take a look at it since our little girl won't eat veggies at home. From my understanding the book describes ways to sneak in veggies and fruits into any meal. I don't really know what my expectations were but this book relies on all of the veggies and fruits be pureed vs 'snuck' in like I had thought. While this idea sounds good in theory, I was really happy to get rid of the pureed foods and am not really wanting to bring them back. I will have to if we cannot find a way to get Libby to eat veggies on her own. However, I would, of course, get her to learn to eat them versus me having to sneak them in as that is the whole point of getting her to learn to eat healthy.

* Jim didn't *just* get me a cookbook for Christmas. =) He also got me other wonderful things!
Posted by mommyski at 8:11 PM No comments:

Merry Christmas from the Skis! We couldn't get a family picture of the three of us (yet)...so this will have to do. Apparently every picture we have of Libby that is any good is one where she has a finger in her mouth =) 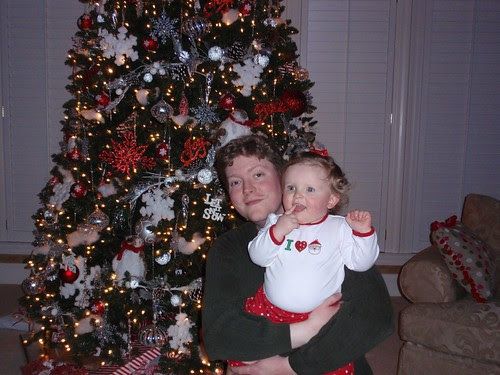 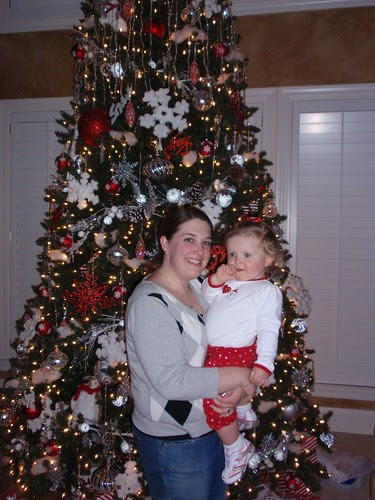 My how things have changed since last year!!!

Libby wasn't interested in her present when it was in the box but once it was out and put together she loved it! Boy, these presents sure have a lot of parts!

Libby did not get the whole opening the presents thing. It was just a box to her...she didn't really care.

Christmas Eve at the Michel House

Here is a cute video of Libby "opening" her presents at Grandma and Grandpa Ski's house. 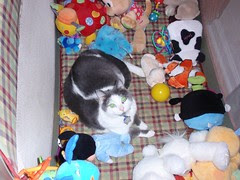 12.22.08 Max in Pack n play
Originally uploaded by Holly Mroczkowski.
It's been awhile since I have put anything up about our crazy cat Max. He's still around and is really tolerating Libby well. I have to say that was one of my biggest worries. My fear was they wouldn't get along and I would have to give Max away. Libby and Max seem to have an understanding where they don't push things too far. Libby will even go so far as to tell Max a whole story while waving her arms and Max just watches (usually terrified). She's getting pretty good at petting him too...which he really enjoys! It really is a relationship that I cannot wait to see develop!
Posted by Holly at 9:04 AM No comments:

This was the video I took w/o knowing that Jim took a video too.

Jim took video of Libby and the Christmas Tree. I didn't know it...here is his video. Mine will follow in a bit.

I was at Walgreens today and found this really cool item that solved all of our problems of Libby throwing her sippy cups at every meal time. It is called No throw and I hope other parents can use this too! We plan to use it at home and when we are out too.

Here is one of Libby playing. 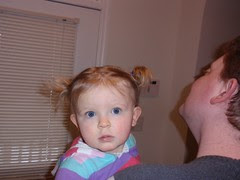 12.18.08 Pigtails! (2)
Originally uploaded by Holly Mroczkowski.
Libby's hair is long enough for us to pull it back. The other day I put it up in pigtails. She didn't like it but I did manage to get a quick picture for proof!
Posted by Holly at 9:57 AM No comments: 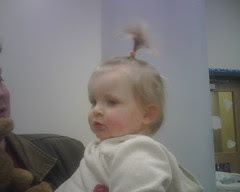 12.15.08 Hair
Originally uploaded by Holly Mroczkowski.
Libby's daycare must have been bored because when Jim and I picked her up today, this is what they did to her hair. Isn't it too funny?
Posted by Holly at 5:58 PM No comments: 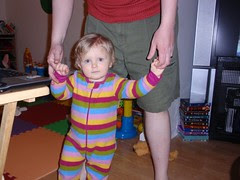 12.14.08 Libby in her PJs
Originally uploaded by Holly Mroczkowski.
Just because I love these new PJs...they are so snuggly warm. Plus, who wouldn't want footie PJs? =)
Posted by Holly at 10:17 AM No comments:

Libby is officially a toddler and with that comes injuries. I always thought about it theoretically, you know? Oh, kids are going to fall because they are learning to walk but it is so different when it is your child falling. Our day care is wonderful and call us about anything and everything around Libby - the good and the bad. Lately, unfortunately, it has been focusing more on the bad - falling. Thursday afternoon her teacher called me to tell me Libby had another bad fall. This one seemed worse than the other 3 or 4 they have called me about over the last few weeks since she has officially been walking 99% of the time. They assured me that everything was fine but had to tell me. So, I assumed everything was ok until I picked her up and saw a giant black and blue welt on her right side of her head. She squealed when she saw me and when I picked her up she told me in very eerily plain baby gibberish that I understood what had happened to her. Libby kept pointing to the bookshelf where she tripped and fell into, then her head, said "Ow" and "Boom", and then pointed to all of the kids. I didn't even need the teachers to tell me more...Libby explained everything and then the teachers explained to me that I need to watch her for a possible concussion. So Jim and I were worried all night about her but she was fine! Libby's a tough cookie I have to say. You would never know she was in any pain...everything was normal for her that night. Then yesterday, Friday, she tipped over again. So, I ask everyone reading this - why hasn't there been some kind of aparatus created to surround these kids in pillows? I am thinking about taking back her Christmas present that Jim and I got her and getting her a helmet instead!
Posted by mommyski at 6:54 AM No comments: 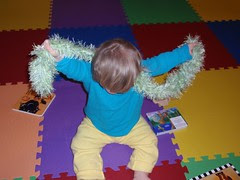 Here is proof of how much she talks. We simply sat down on the couch and this is what happened. We love it!

I made the 'mistake' of giving Libby a scarf today. She immediately took it and put it around her neck - where it stayed for the remainder of the day. 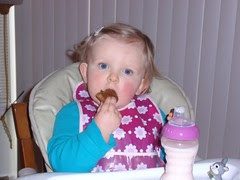 12.6.08 Cookie! (2)
Originally uploaded by Holly Mroczkowski.
Libby officially loves chocolate chip cookies. If we would let her, she would eat them ALL day!
Posted by Holly at 9:32 AM No comments:

I haven't really posted any true updates (besides videos and pictures) in awhile so I thought I would write something up. Things are going well here in the Ski Household. We had a wonderful Thanksgiving with friends and family - four of them actually. Even though Libby won't eat turkey still (just by choice), Jim and I enjoyed the dinners. Actually, it was mostly Jim because I had a stomach bug that prevented me from eating a lot of the dinners. Unfortunately that bug has hit my Grandma, Mom, Dad, sister, and Libby (slightly). I think it may not have spread any further past that but it definitely was no fun. My Dad is still getting over it. Each of us had different symptoms so it was strange. In any case, Thanksgiving was still fun to see everyone!

Libby is growing more and more each day. She's loving her new daycare and so are we. She's been there for almost 2 months and I still do not have any complaints. Libby's teachers all love her and have nicknamed her "Boo" or "Boo Boo". I am going to choose to think that isn't because she falls a lot. =) Oh the falling...that is mostly because she is walking now. I just cannot believe it. She still wants to hold our hand everywhere but doesn't really need it. And let me tell you, if we don't hold our hand out she'll tell you to or will just grab it. We also installed a gate in front of her room so if she climbed out (which I am terrified of!) she cannot go anywhere. She's also started saying "no" and wagging her finger - which is funny and adorable. It is usually a response after Jim and I are talking to one another and say no. Jim has caught her numerous times saying no back and wagging her finger at us. You cannot help but laugh.

Libby's vocab is also growing each day. She's added several words to her vocab in the last month - princess, baby, duck are just to name a few. Of course when she says, "I did it!" and throws her hands up in the air that makes me beam. She's such a little sponge when it comes to things lately.

Meals are also going well. She is completely off of baby food now and when we go out to dinner we actually order her a kid's meal (which she eats maybe 1/4 of). That part is really odd for me because I still think of her as a baby even though she really isn't anymore. She still doesn't like meat unless it is in a nugget form but I'll still take it! She went through a fish only phase where she would eat anything that came from the sea. I don't think that is sticking around but as long as it has breading on it, she's good.

We're really looking forward to Christmas and New Years this year. We haven't put the tree up yet but hope to in the next week or so. That is going to be an adventure with her walking around now!!

Welp, that's all I have to write up as of now. We hope all of your Thanksgivings were as wonderful as ours!
Posted by mommyski at 9:19 AM No comments: