So if that wasn't bad enough when the doctor first got a look at our little bundle of joy she said the words I was dreading to hear, "Oh, ok so the baby is breach and has his or her hands 'down there'." That was not the news I wanted to hear after waiting so long. But as you can see from the pictures below, the baby woke up and then (what you can't tell) became a complete SPAZ like her Mommy. She was ALL over the place. The doctor had a horrible time getting her to stay still long enough to take her measurements. All I found out that all of her organs are good and is completely healthy and 'normal'. =) I was so relieved. Now we just had to find out the sex. Well, that wasn't too tricky after she became a crazy baby moving all over the place. She gave us a perfect shot of 'her stuff' and we knew she was a girl.

Not only was this week great to know that the baby is healthy and a girl, I could also feel her moving around a lot more and she is beginning to kick/punch more often. My stomach is beginning to actually move now so if I can time it right, Jim can actually feel her move. We haven't been lucky so far but eventually! I'm starting to figure out what the baby likes and dislikes and what will get her moving...so we'll see what can happen. Chili is awesome to get her to move.

In any case, here are the ultrasound pictures. Enjoy! 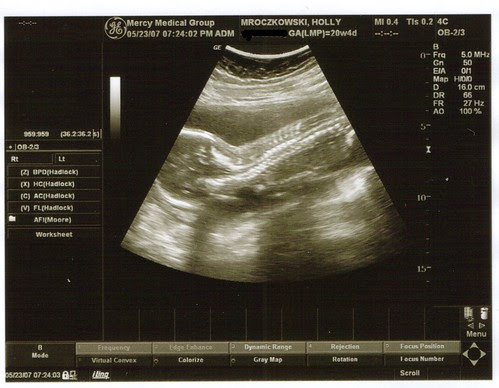 Showing us her stuff! 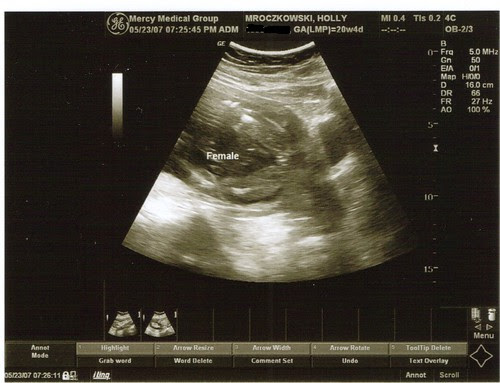 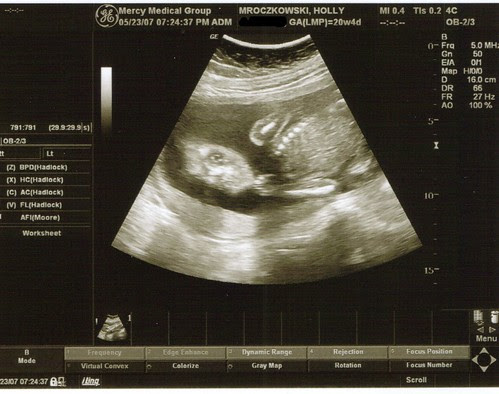 Well, if you don't want to know what we're going to have please stop reading NOW (ahem, Jim's Dad)...

Well, Ladies and Gentlemen we're going to have a....

Well I finally buckled down and but a ton of maternity clothes. The belly is very obvious now and 'normal' clothes were not working.

Not much else happened this week. My sister managed to track down her very own machine to hear the baby's heartbeat so we got to have my parent's listen to Erin's baby and mine last weekend. That was a truly awesome Mother's Day present for everyone involved!! I must say that once I learned we could get one of these machines on our own I made it my mission to find one. There are lots available and they vary in quality but for now we are not getting one. They are pretty cool though. =)

You know certain woman just look absolutely gorgeous pregnant? And just as happy as can be? My sister is one of those people. Each time I see her I am amazed how absolutely wonderful she looks!! In just two weeks, her belly has grown so much. I cannot wait to see my little niece/nephew this fall. =)

This coming week is the big week of hopefully knowing if 'it' is a boy or girl. So stay tuned. If you don't want to know, I'll try to post it where you won't be able to easily tell. =)
Posted by Holly at 10:28 AM 2 comments:

So the nursery is done! Jim and I were able to put everything together. I think it looks awesome! 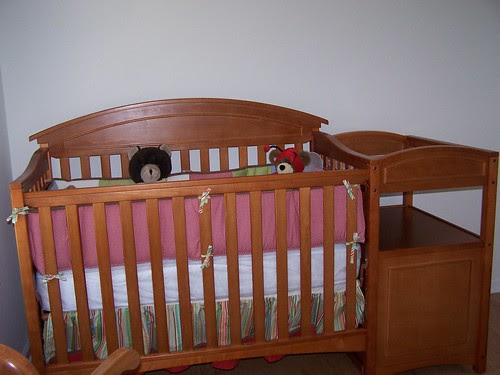 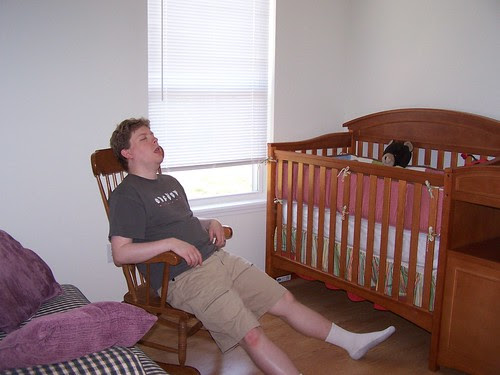 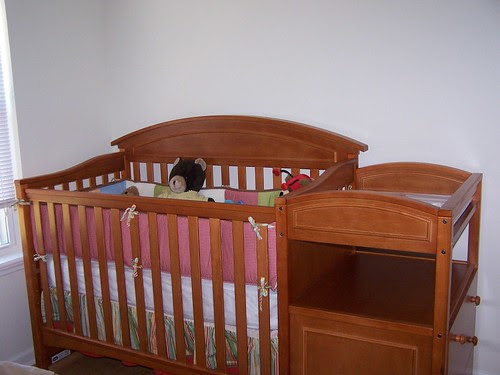 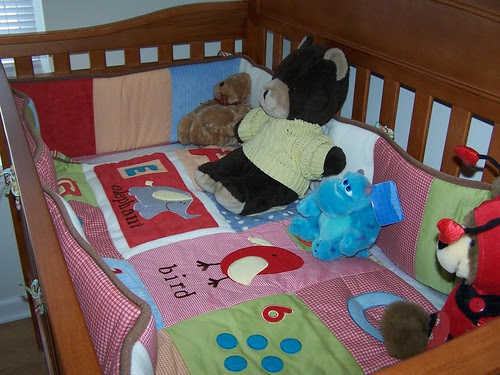 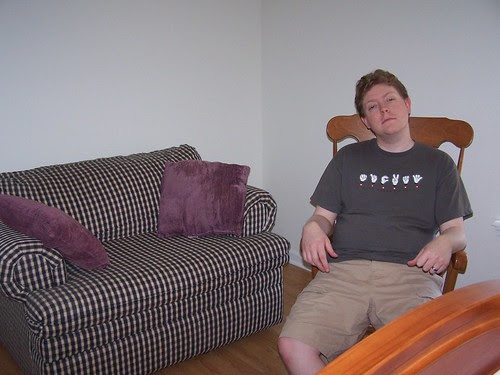 Week 18: The week of movement

This was the first week I felt a true kick. It kind of took me by surprise. Saturday morning I woke up because I felt something strange in my tummy. This kid is going to be a soccer player or something. He/she calmed down the rest of the week until Thursday. The little guy waited until my big daily meeting to kick with both feet at separate times - one right after another - and totally throw me off guard. It is very strange to all of a sudden go from these bubbles to these actual kicks. I am hoping to have them be more often soon so Jim/Dad can join in the fun too.

This week we also went to the doctor. They listened to the baby's heartbeat and she was able to find it a lot quicker this time. I think it helped that my heart rate wasn't sky high this time. =) Everything was good and in less than 2 weeks we'll (hopefully) know if it is a boy or a girl. Everyone keeps asking me if I want a boy or girl. Honestly, I have no opinion. I just want to have the baby be healthy and see it. Everything is becoming so real now. The crib came in this week ... so I know he or she is coming and I just keep counting down. =)
Posted by Holly at 7:27 AM No comments:

Baby is definitely growing stronger. I could feel it doing flips this week and it was wonderful. Someone asked me what it felt like and how I knew it was the baby - well, I just knew. It felt like my belly was a glass and someone was blowing bubbles through a straw in it. It was a constant flutter.

I keep getting asked why there are no pictures on this site of my growing belly...well, because I am huge. =) In any case, I will try to post some in the next coming weeks.
Posted by Holly at 1:07 PM 1 comment:

Well, we are nearing the halfway point now, and I think I'm just about ready.

Oh, I know. "You can't ever be ready." That's what They say. Let's be honest, though: how often are They right about anything? Really? Everyone tells you that parenthood is a constant state of fretting, hypochondria, projecting an air of calm reassurance, and sleeplessness. If this is true, I have been training for parenthood for most of my adult life.

There is one area, though, in which I am completely deficient: if I am going to be a good role model and shape young minds, I am going to need to learn and practice some profanity substitutes in a big hurry. And the usual ones aren't going to cut it,either. "Shoot" and "darn" are not going to get it done. When someone cuts me off on the highway and I almost crash, I will never get to a place where I reflexively say "shoot."

Though she would deny it, my mom's approach to this problem was always to let the bad word slip out and then say, "That's a bad word; don't ever say that." This was obviously tremendously helpful. Dad had a full regiment of fake swears, but they're his and I don't want to sound like him. He's a big fan of "oh, nuts." I'm not from the forties, so that's not in the cards.

As I see it, I have two solid options.

1) Super-villain: "Curses! Blast you, you dratted fools! You nearly ran me off the benighted road!"


I'm leaning towards 1). The child's vocabulary will turn out much better that way.


Any suggestions from existing parents who have already had to become more upstanding citizens would be greatly appreciated. I like "drat!" a lot; "rats!" is growing on me; I am a big fan of "clown" and its sister word, "bozo." Beyond that, I have nothin'.
Posted by Jim at 8:20 PM 3 comments: